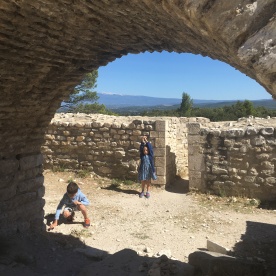 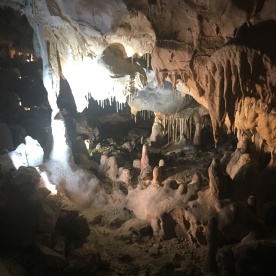 We went to underground caves at Thouzon.  They were under a hill that we climbed that had an ancient castle at the top (it used to be an abbey).  Maeve thought that the caves were a fairy church.  She found fairy jewels there.  There were lots of stalactites and stalacmites made of calcium.  Stalacmites are at the bottom, and stalactites are at the top.  When they join up they make a column.  Before they become stalactites, the long stringy hollow bits of calcite are called macaroni, like the pasta!  We saw a baby fossilised bat that was 5000 years old – it was very cute.  There used to be bats living in the caves, but when the chimneys leading to the top collapsed 5000 years ago, they couldn’t get out or in ever again.  They think that there are lots more underground caves leading from the caves at Thouzon underground – they are like an underground world that humans don’t know about.

This is a text widget. The Text Widget allows you to add text or HTML to your sidebar. You can use a text widget to display text, links, images, HTML, or a combination of these. Edit them in the Widget section of the Customizer.
%d bloggers like this: