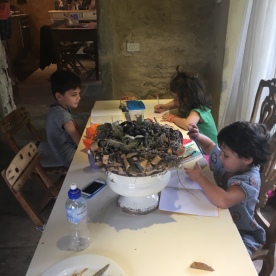 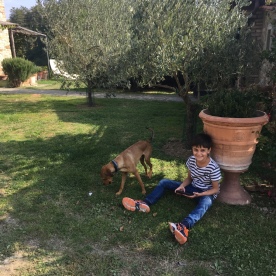 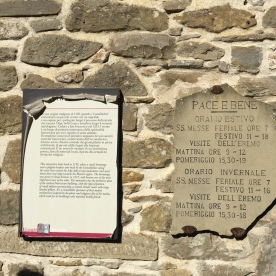 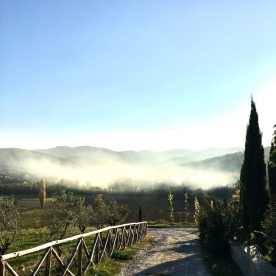 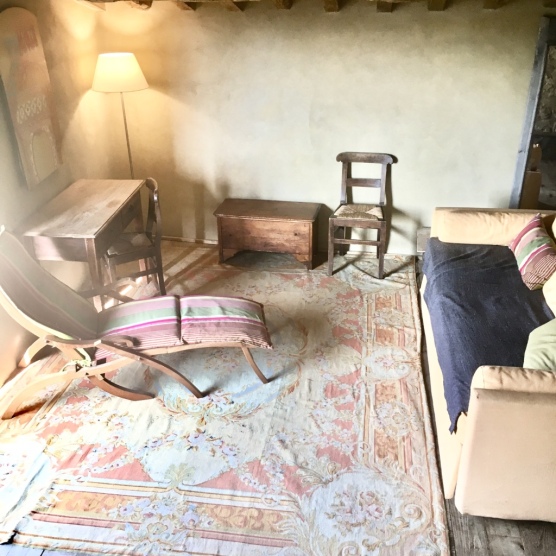 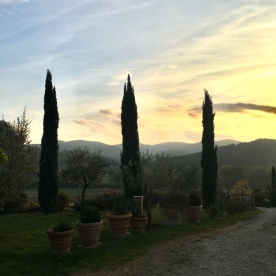 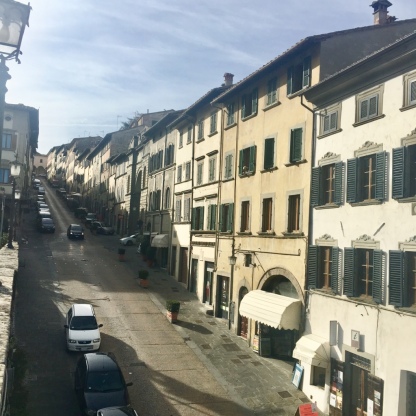 We are in Anghiari in Tuscany.  It is an ancient medieval town near Arezzo.  Nonna has come to visit us here – we were very excited to see her.

Margot loves walking in medieval towns, so she loves Anghiari and the town of Sonsepolcro which is nearby.

Anghiari is famous for a few things.  The first thing is St Francis of Assisi.  He was a monk who became a saint and he walked from Anghiari to the monastery at Montecasale above Sansepolcro and stayed there.  We went to the monastery today – we saw a monk there and he spoke to us and told us to go outside so the monks could pray in private.  He was very nice, and wanted to know all our names.  St Francis was famous for being kind and for talking to every creature, including birds.  Everyone prayed at the monastery and Maeve prayed for the birds, and Jasper prayed for birds to be everywhere. Afterwards we saw some nuns in Anghiari.  The monastery was very quiet and secret and mysterious.  At the start, the sign to the monastery was hidden so we thought that only special people could get there.  Monks are not married because they are married to God.  Nuns are the female versions of monks and we saw some nuns in Anghiari afterwards on the same day.

There is a really amazing straight road that leads from Anghiari straight down the mountain and back up again to the monastery.  It was built to remember St Francis and it is really straight.

Another thing Anghiari is famous for is the Battle of Anghiari.  This was a big fight on the plains underneath Anghiari on and and next to the very straight road in 1440.  The Florentines were fighting against the Milanese to get control of Anghiari and Sansepolcro.  The Florentines (from Florence) won the battle and it became really famous.  About 50 years after the Battle of Anghiari Leonardo da Vinci was asked to draw a fresco of it.  He is probably the most famous painter in the world, and he painted the Mona Lisa and the Last Supper (in Milan).  Nonna gave us a book about Leonardo da Vinci which we are reading.  Leonardo never finished his painting of the Battle of Anghiari on the walls of the Palazzo Vecchio in Florence – we don’t know why.  Everyone who saw it said it was the most amazing painting in the world, but don’t know for sure because it has been lost – another painter called Vasari painted over it with a different fresco 50 years later.  Maybe we will find the painting of the Battle of Anghiari tomorrow when we go to Florence.

The other beautiful town we visited, which is at the end of the straight road as well was Sansepolcro.  We saw a painting that some people think is the best painting in the world. The painting was of Jesus rising from the dead (The Resurrection) and it was a fresco on the walls of a building in Sansepolcro.  It was by a famous painter called Piero della Francesca who was from Sansepolcro.  It was being restored when we visited it.  The painting was nearly destroyed in the second world war by the British.  The commander of the British regiment stationed there (Clark) during the war was ordered to bomb Sansepolcro, but he remembered that he had read an essay by Aldous Huxley saying that the fresco was the best painting in the world so he refused to bomb the town.  The people of Sansepolcro think that Clark was a hero for saving the painting and the town and have named a street after him.

We are still learning about Greek and Roman mythology and we watched the old version of Clash of The Titans twice about Perseus slaying Medusa.

We are staying in a beautiful place in Anghiari called Poggiodoro – there is a dog called Lapo here who we love playing with and we go for walks all the time.  Our house is an old cigar-making building and it is lovely.

2 thoughts on “Anghiari in Tuscany”