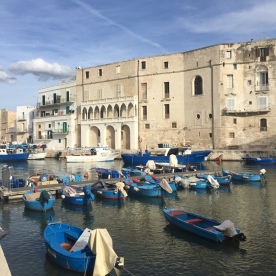 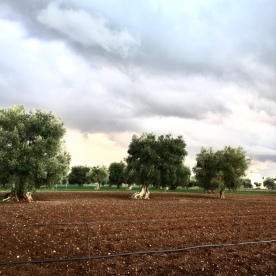 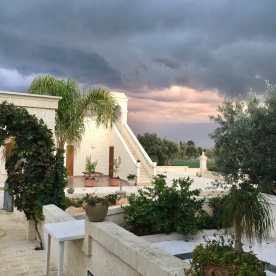 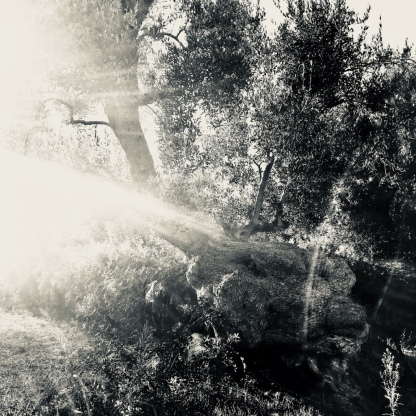 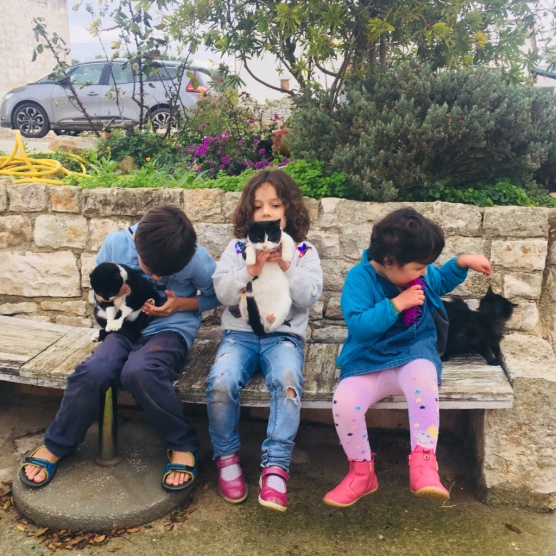 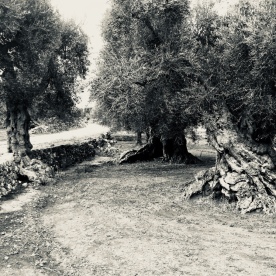 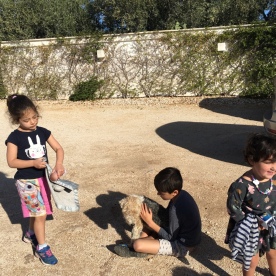 We have spent the last week in Puglia.

First we stayed at Masseria Alchimia near Fasano.  There was a dog called Luna there who we absolutely loved.  We visited the beach near our house at Torre Guaceto and it was amazing!  We went back there three more times.  Jasper built a big castle which he called the Castle of Dubibe in the sand – we thought it would get washed away or destroyed by people walking past it, but every day we went back it was still there!  We also made other sand sculptures including a hippopotamus and so many bottoms.

We were sad to leave Luna, but afterwards we came to stay at a fairy house (or trulli) which had 10 cats!  It was amazing and we played with them every single day.

We went to the circus one night at Locorotondo!  We saw acrobats, a strong man who lifted a lady up on a pole using only his forehead to hold her up, We saw a lion and some tigers in a cage, and best of all we saw a hippopotamus!  Maeve couldn’t believe it! We also saw a horse dressed up as Pegasus. Mum and dad thought it was cruel for the animals to be used in the circus.

We visited some beautiful towns in Puglia called Alberobello (where there were hundreds of trulli houses), Ostuni (which is a white city) and Monopoli (which is a beautiful town by the sea where we ate delicious seafood and played at the beach).

The olive trees in Puglia are amazing – they are absolutely everywhere and some of them are over 1000 years old!  They are protected by the government because they are so old and special.

When we were in Fasano we stayed very close to old ruins called Egnazia – it was called Gnacia in Roman times and it is one of the places where Horace stopped on his famous trip from Rome to Brundisium.  Mum was very excited about this.

Puglia is very beautiful and very different from the rest of Italy.

2 thoughts on “Puglia – Fasano and Cisternino”